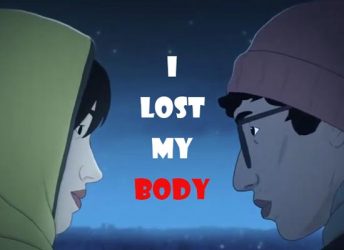 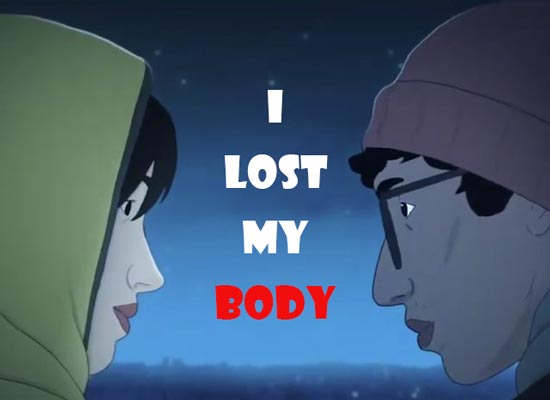 I Lost My Body (French: J’ai perdu mon corps) is a 2019 French animated drama fantasy film directed by Jérémy Clapin. It was premiered in the International Critics’ Week section at the 2019 Cannes Film Festival, where it won the Nespresso Grand Prize, becoming the first animated film to do so in the section’s history.

A severed hand escapes the lab it is being held in and begins a harrowing journey back to its body, belonging to a young man, Naoufel. As a boy, Naoufel aspired to be both a pianist and an astronaut, and enjoyed recording his day-to-day life on a tape recorder. However, after he loses both of his parents in a car accident, he is forced to live with his emotionally distant uncle and his crude cousin. Now an adult, Naoufel skates by as a pizza deliveryman, though he is criticized by his boss for constantly being late. During one delivery, Naoufel delivers a late pizza to a young woman, Gabrielle, at her apartment. Though they never see each other (as Naoufel is unable to get through the lobby’s security door), they have a long conversation, and Naoufel quickly becomes infatuated with her.

Naoufel tracks Gabrielle down, but when he finally reaches the library where she works, he is too nervous to introduce himself. After she leaves work, he follows her to a neighborhood where she drops off medicine to a carpenter, Gigi. After being noticed, Naoufel notices a nearby want ad for an apprentice, and pretends to have come to take up the position. The terminally ill Gigi is at first reluctant to take on an apprentice, but accepts after he learns that Naoufel is an orphan. Naoufel moves out of his uncle’s house and into an attic apartment provided by Gigi. Naoufel learns he can access the roof tops of surrounding buildings from his new place. He spends time learning his trade and getting closer to Gabrielle, though he keeps his real identity a secret. In the present day, the severed hand continues its journey, evading a blind man and his aggressive service dog and encountering a baby (one of the only characters to notice it).

During one conversation at the library, Naoufel checks out a book about Arctic. Gabrielle remarks that everyone likes polar bears because they are cute, but it is impossible for people like them to ever go to a place like Antarctica. Naoufel begins to build a wood igloo on one of the roof tops he can access.

Naoufel returns home one day and is unhappy to find his cousin there talking to Gabrielle. He learns she has accepted a party invitation for them. Gabrielle is to come pick up Naoufel later that evening. That evening, Gabrielle arrives and says they can skip the party. Naoufel takes her to the roof tops and asks Gabrielle if she believes in fate. When she questions him further, he argues that you can change your fate by doing something unconventional, such as leaping off the ledge onto the crane that is a few feet away from them. He show her the igloo he built. They hang out and he tells her he ordered pizza.

In the igloo, Naoufel reveals himself as the pizza deliveryman to Gabrielle. Upset, Gabrielle misinterprets his intentions and rejects him, leaving Naoufel hurt and dejected. Naoufel goes to his cousin’s party alone and proceeds to get into a drunk fight.

The next morning, Naoufel returns to work hungover and sporting a black eye. Gigi left him instructions for a hangover cure as well as a project. In the middle of cutting wood on a jigsaw, Naoufel is distracted by a fly. He recalls his father’s lessons on catching a fly – to go at it from the side where the fly isn’t expecting you. Intent on capturing the fly, Naoufel gets his watch caught in the jigsaw, severing his hand. Eventually, the severed hand reaches Naoufel while he is asleep, but it is unable to reattach itself to his arm.

Naoufel, depressed and hopeless, revisits his old tape recorder, which still has recordings of his parents — including the car ride before the accident. Gigi attempts to talk to him, but Naoufel doesn’t respond. Sometime later, he leaves his apartment. Gabrielle comes to see him and finds his room empty. After searching the empty igloo, Gabrielle finds Naoufel’s old, abandoned tape recorder. She discovers a new recording on it. Listening, she worries that he may have committed suicide, and instead learns he had successfully leaped off the ledge onto the crane as he had once hypothesized.

Naoufel lies in the crane and begins smiling to himself as he looks out at the city. His severed hand retreats into the snow. 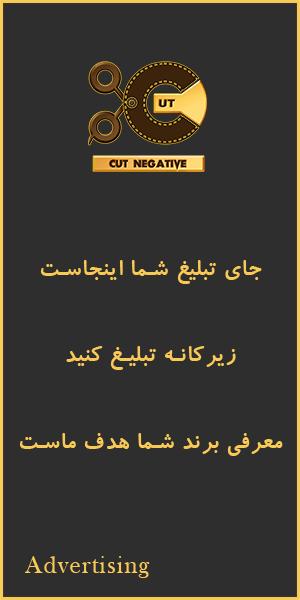